By Christine Simmons and Lizzy McLellan
January 16, 2020
The American Lawyer

By Christine Simmons and Lizzy McLellan
January 16, 2020
The American Lawyer 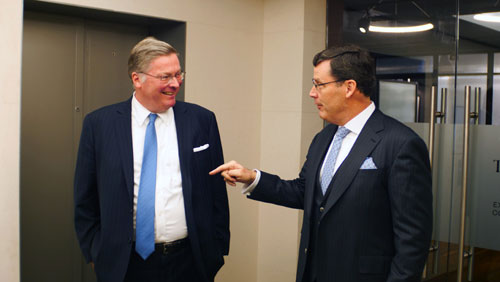 Duane Morris and Satterlee Stephens, a 65-attorney New York firm, have confirmed plans to merge, anticipating a combination by Feb. 1.

The firms’ leaders said Thursday that partners of both firms have approved the material terms of a merger agreement in the last 48 hours and it was expected that partners would have “final sign off” by Jan. 31. The combination will be effective the next day.

The combined firm will have annual gross revenue of at least $530 million, Duane Morris’ Matthew Taylor said, based on both firm’s financial performance in prior years.

Taylor, chairman of 800-lawyer Duane Morris, and James Coster, chair of Satterlee’s executive committee, said the deal is a traditional merger—all 65 of Satterlee’s lawyers will be invited to join the Philadelphia-based Am Law 100 firm and are expected to do so, save for one or two who may retire. All Satterlee staff were also invited to join Duane Morris, the leaders said, declining to comment on the specific merger terms.

Duane Morris entered the New York market about 25 years ago and currently has just under 100 lawyers in the city. With the deal, the firm’s New York office expands by 60%.

Taylor noted that compared with many large law firms, Duane Morris offers a value proposition in its rates by allowing lawyers to be “entrepreneurial, flexible and creative” when agreeing with clients on rates and alternative fee arrangements.

Coster, for his part, said rates at Satterlee are often set on an individual lawyer basis.

When the deal is effective, Coster will become co-head of Duane Morris’ New York offices, along with the current office leader, Michael Grohman. Coster and another Satterlee partner will also join Duane Morris’ board.

Coster said Satterlee’s past three years have been very healthy and the firm was not a position where it had to merge for financial or lease issues. Both Coster and Taylor said each firm’s New York offices have “several more” years left.

The firms’ New York offices will remain separate for now. Firm leaders say they plan to announce a combined New York space at a later date.

Coster said Satterlee has been approached by other firms interested in merging numerous times over the years, and the reaction has been an immediate no nine out of 10 times. The New York firm was previously in discussions with Crowell & Moring, the New York Law Journal reported in 2016, but the talks fizzled.

While sources have reported to ALM that Duane Morris and Satterlee have been in on and off merger talks for the last few years, Taylor denied that timeline. He said the firms began talking in earnest last Spring, and that no recruiter or consultant was on the deal.

As the firms’ partners met more in the last year, Coster said he got over past concerns of becoming only a small part of a much larger entity.

“That was a huge issue for us,” Coster said, but Taylor “made us feel at ease that we were going to be really an important part of the firm. Again, that took time, but we became really comfortable.”

Asked how the merger situates Duane Morris’ New York presence in relation to that of other large, Philadelphia-based firms, Taylor said, “This puts us as a combined group as strong as any firm out there.”

According to data from ALM Intelligence, among Pennsylvania-founded firms, only Dechert, Morgan, Lewis & Bockius and Reed Smith had more than 160 lawyers in New York as of 2019.

“To have us at over 160 lawyers in really the epicenter of the world is really a great statement to our clients that we’re going to be a formidable presence in New York,” Taylor said. “When you’re a big firm in the Am Law 100, to be strong, you need to be strong in New York.”

In addition to New York, Taylor said Northern California, Texas and Chicago are key areas for potential growth in the firm’s strategy domestically, as well as Singapore and London internationally. In recent years, some of the firm’s biggest deals were outside the country, as it looked to grow in Asia.

Taylor noted that Duane Morris has done a number of other sizable U.S. deals in the last decade-plus. It brought on more than 53 from Wolf Block in 2009, completed a 64-lawyer merger with San Francisco-based Hancock Rothert & Bunshoft in 2006, and it brought on more than 20 lawyers from Thelen when that firm was faltering.

By Christine Simmons
and Lizzy McLellan